Background: The production of 2G bio-butanol has been mostly analysed from an experimental approach, while the development of mathematical models has been focused on the evaluation of global process performance and coupling different unit operations. However, modelling and simulation have not been explored to investigate design configurations, which enhance butanol production by additives feeding or biomass confinement.

Methods: The methodology included the dynamic mathematical models collection and their implementation in two process configurations which included the pretreatment, enzymatic hydrolysis and butanol production. The evaluation of different acetate and butyrate feeding ratios was investigated within the additives model validity range. Additionally, the effect of biomass recycle was studied.

Results: Three scenarios were investigated, the so called ABE: C-C, ABE: C_RECY-C and biomass confinement in ABE: C_RECY-C. Dynamic simulations were performed using stepwise disturbances in the inlet streams of sodium butyrate and sodium acetate. Stationary performance indexes were analysed for each simulation scenario. Continuous hydrolysis and fermentation (ABE: C-C) showed better performance than ABE:C_RECY-C, but relative butanol enhancement in the second configuration was higher and then it was further investigated. The best scenario was obtained using ABE:C_RECY-C and biomass confinement which resulted in a substantial butanol enhancement.

Conclusion: The results showed that it was possible to increase the butanol production by adding the proper ratio of acetate and butyrate to the fermentation for each configuration. Compared with the case where none of the additives were fed, both configurations resulted in 44.7% and 58.8% higher concentration of butanol. Additionally, the continuous biomass recirculation to the ABE:C_RECY-C process plus additives resulted in 477% increase in butanol concentration and 97% reduction in the unconsumed substrate. 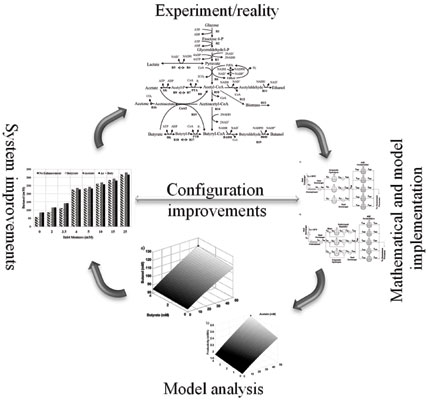